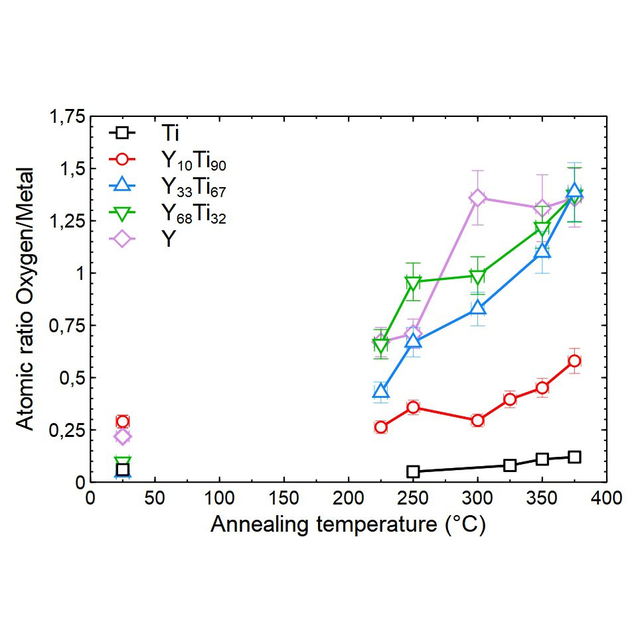 Yttrium, titanium, and yttrium-titanium getter thin films were elaborated on silicon by coevaporation in ultrahigh vacuum. Y-Ti films exhibit nanometric crystallites size (18–35 nm) leading to a very high grain boundary density, which is a favorable microstructure for activation at low temperature. The yttrium content in Y-Ti alloys influences grain size, resistance against room temperature oxidation, and gettering performance for oxygen. Y-Ti films with an yttrium content higher than 30% show strong oxygen sorption during annealing at low temperature (<300 °C). After 1 h of annealing at 250 °C, it was estimated that the yttrium-based getter films can trap between 0.2 and 0.5 μmol of oxygen per cm2 , while no oxygen sorption was detected for a single metal titanium film. This makes Y-Ti getter alloys attractive candidates for the packaging of MEMS under vacuum with a low bonding temperature.

A getter film is a metallic thin film that sorbs gaseous species when it is heated. A getter is required to package under vacuum several kind of MEMS which need vacuum to operate properly. For an ANR project, we develop new getter thin films based on the element yttrium, a transition metal which is also a rare earth. In this work, researchers from C2N, CEMHTI and IM2NP have developed new getter films based on the element yttrium, which is a transition metal and also a rare earth. In this work, the getter properties for oxygen-containing gases of thin films made by ultra-high vacuum co-evaporation of yttrium and titanium-yttrium at temperatures ranging from 200 °C to 400 °C were evaluated. They were compared with those of titanium film, the best known and most known used getter.