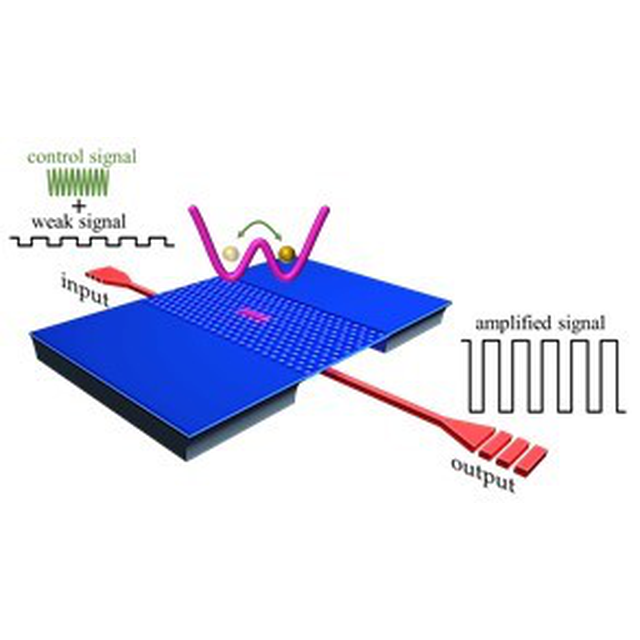 The enhancement mechanism of a weak (undetectable) signal, known as vibrational resonance, is activated by modulating an input field at high frequency and submitting it to a bistable system.  Such general and wide spread concept has been theoretically investigated on various type of systems e.g. neural networks, excitable systems and even biological networks. Meanwhile, few experimental works have also been published but with devices whose works of principle rely on different physics (electronic circuits, VCSELS, electromechanical resonators…). In all these demonstrations, there are as many nonlinearities involved as there are systems. However, up to now, no demonstration of vibrational resonance has been performed using an integrated optical nanocavity with the well-known and largely used thermo-optical nonlinearity. Such nonlinearity manifests itself and strongly impacts optical and nanophotonic devices to the point of allowing tunability and elementary computational all-optical components.

In this context, we present a first experimental demonstration of weak optical signal amplification in a thermo-optically bistable optomechanical nanocavity, a fortiori operating in the telecom domain. We make use of a fully integrated hybrid platform including a suspended InP photonic crystal whose mechanical vibrations can interestingly be exploited to access the thermal properties of the system. Using thermo-optical nonlinearity, amplification of a weak optical signal of up to 16 dB have been achieved. These results have been published in NanoLetters.

Yet, the study of weak signal enhancement is of immediate interest for current nanophotonic technologies, in which the amplification of low-power signal remains a necessity. Beyond the optical domain, interaction between optical and mechanical degree of freedom, present in suspended photonic crystal, could open avenues of amplification of optical signal thanks to mechanics or vice versa. Furthermore, the optomechanical dimension of this system makes it also particularly well suited for sensing application like e.g. thermometry.

Figure : Schematic diagram of vibrational resonance with an optomechanical resonator exhibiting thermo-optic non-linearity. A weak signal as well as a control signal are sent to the system allowing the amplification of the first mentioned signal.