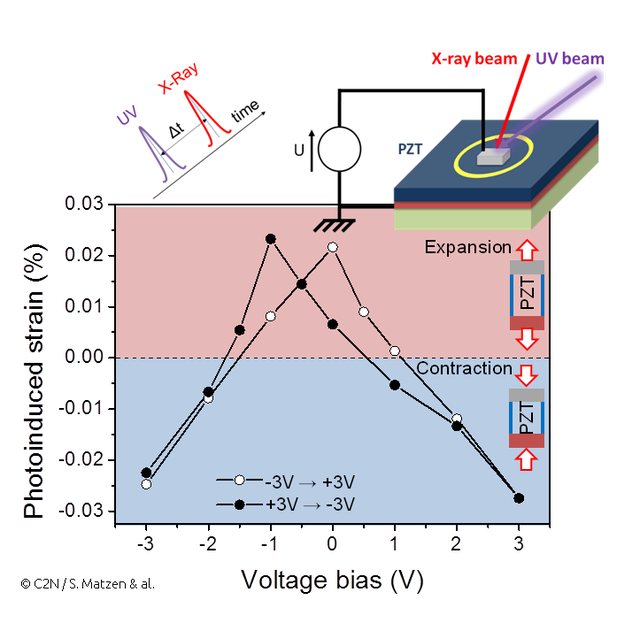 Thanks to the integration and characterization of ferroelectric thin films into capacitive micro-devices, a team of researchers at C2N has shown that it is possible to control their photostrictive response with a sub-nanosecond time resolution by playing on the internal electric field.

The generation of deformations under illumination in ferroelectric materials, or photostriction, is known to be a complex mechanism combining the photovoltaic effect (generation of electron-hole carriers under optical illumination) and the inverse piezoelectric-effect (mechanical deformation induced by an electric field). This relatively unexplored phenomenon is currently attracting increasing interest with the aim to develop and integrate new functionalities into devices. Until now, research has mainly remained focused on fundamental studies of bulk materials, making their technological integration difficult. Some recent studies on thin films have revealed significant strain rates (of the order of 10-3) at very fast time scales (around 100 picoseconds). Nevertheless, in these investigations the thin films remained with their initial ferroelectric polarization, without any possibility of ex situ control of the photoinduced deformations.

Thanks to the C2N cleanroom Technology facility, researchers at C2N were able to integrate and characterize ferroelectric thin films of Pb(Zr,Ti)O3 (PZT) into microdevices. The photostrictive response could be studied, and controlled, in operando by applying a voltage to modify the ferroelectric polarization state. More precisely, time-resolved X-ray diffraction measurements were carried out at the APS synchrotron (Argonne, USA)1. This made it possible to study the photoinduced changes of the PZT lattice parameter following a UV pulse with a time resolution of 100 picoseconds. Researchers at C2N have shown that it is possible to control both the direction (contraction or elongation) and the amplitude of photoinduced deformation at a sub-nanosecond time resolution by playing on the photoinduced variation of the internal electric field. Thus, photostriction can generate both elongations and contractions by controlling the state of polarization of the ferroelectric material. In addition, two distinct remanent photostrictive states could be achieved. This work was published in the journal Advanced Electronic Materials.

These results provide fundamental information on the light-matter interaction in ferroelectrics and promise new paths for the engineering of multifunctional materials. In particular, the optical control of their properties could be exploited in novel memory type devices, or more generally in all the systems where a transient electric field or a transient strain allows controlling materials’ functionalities.

1 In the framework of the collaboration with the International Associated Laboratory (LIA) Nanoelectronics: https://www.c2n.universite-paris-saclay.fr/en/recherche/international-associated-laboratories/lia-nanoelec/

Figure: (top) Sketch of pump-probe experiments allowing to measure by X-ray diffraction the lattice parameter, following a UV pulse, of a ferroelectric thin film of PZT integrated between two electrodes. (bottom) Photoinduced deformation 2.5 nanoseconds after the UV pulse, depending on the applied voltage, showing a hysteresis phenomenon and the control of the amplitude and the sign of the deformation, with two distinct photostrictive responses when voltage is at zero. © C2N / S. Matzen & al.