A lab-on-a-chip for the ultrasensitive detection of biomarkers 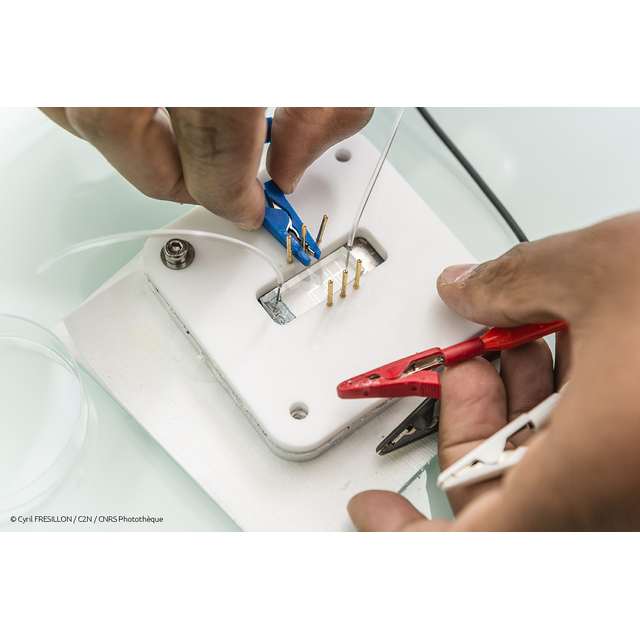 This article was first published in the CNRS – La lettre Innovation (in French) in September 2019, under « Brevets et licences ».

A team of researchers at the Centre de Nanosciences et de Nanotechnologies has developed an innovative microfluidic technology for the analysis of microRNA. The device is designed for the rapid detection of biomarkers in biological fluids and opens the door to early diagnosis without the need to remove tissue samples.

The liquid biopsy, which could detect early cancer by simple blood or urine analyse, without extraction of tissue samples, is still in the research stage. It involves the development of ultra-sensitive detection techniques for biomarkers (DNA or RNA found in the blood, for example). The lab-on-a-chip device developed by a team of the Centre de Nanosciences et de Nanotechnologies paves the way for rapid and ultra-sensitive diagnostics1. Based on microfluidic technology, it is able to carry out the capture, the release and the detection of a micro-RNA specific for liver cancer. The system has been patented2.

Micro-RNAs (miRNAs) circulating in the blood represent some very promising biomarkers for the early detection of various pathologies: cardiovascular diseases, haemorrhagic shocks, cancerous lesions... Currently, the analysis of miRNAs is generally separated into three stages: the extraction of the total RNAs, including miRNAs, from plasma or serum ; the reverse transcription (RT) of RNAs into complementary DNAs ; and their amplification by PCR (polymerase chain reaction). The major drawbacks of this technique are the duration of the analysis -6 hours on average- and the potential errors during the amplification and detection phase.

Researchers at the Centre de Nanosciences et Nanotechnologies - C2N (CNRS/Univ. Paris-Saclay) propose a very different approach called the HDE (Hyperthermia and Electrochemical Detection) technology. It is based on the over-concentration of RNA strands in a microfluidic device. Magnetic nanoparticles pre-equipped with DNA probes ("locks") are used for the specific capture of target micro-RNAs ("keys"). Magnetic hyperthermia is then used to heat locally and allow the release of RNA strands. Finally, the ultimate detection is performed by electrochemistry on functionalized microelectrode probes for the new dropping of target microRNAs. The integration of these integrated operations in a microfluidic device offers multiple advantages: capture of different types of miRNA in the same sample, the possibility to release without overall elevation of the temperature, the possibility to decrease the volume of the sample needed for the analysis (around a nanoliter), plus the miniaturization and automation of the system (see picture).

The device has demonstrated its validity in the laboratory, by detecting one of the specific miRNAs of liver cancer. All the steps were carried out in less than 3 hours, with an extremely low detection threshold (10-18 mol / L), better than those using PCR-type protocols. The C2N team is now developing an integrated prototype, as part of a project co-financed by two programs: CNRS (AAP Prématuration 2018) and Labex NanoSaclay (AAP Valorisation 2018).  «The objective is to have a working prototype at the end of 2019, then to co-develop an industrial prototype in 2020 with a company», says Jean Gamby3, researcher at Centre de Nanosciences et de Nanotechnologies.

The new ultra-sensitive instrument could be used in prevention (early detection), but also for biological analyses in emergency services, or even directly in the field. The same method could be applied to the detection of other biomarkers, and thus to the prevention of other pathologies.