Teleportation of a quantum state across a metallic island 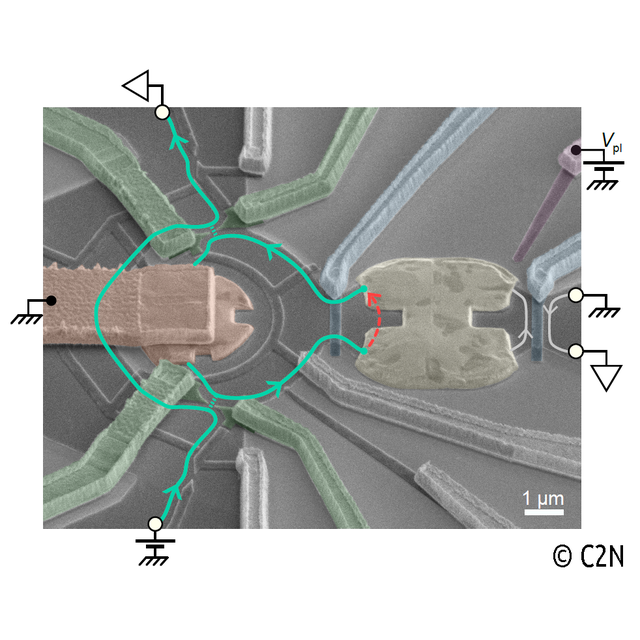 A team of physicists at C2N have observed for the first time the transmission of the quantum state of an electron across a micron-scale metallic island. This is possible thanks to a mechanism connected to the Coulomb interaction, through which the overall charge of the micron-scale island is frozen at low temperature.

The basic principles of quantum physics do not permit to copy the quantum state from one system to another. However, it is possible to transfer the quantum state from one system to another. It is this transfer of information (and not transfer of matter) that one refer to as ‘quantum teleportation’. Until now, physicists had succeeded in carrying out this operation with a photon, the spin of an atom or the pseudo-spin describing a superconducting quantum bit playing the role of the quantum system. To do so, they so far always used the so-called "standard" protocol, based on the use of a quantum entanglement between two particles. For the first time, physicists at C2N have now carried out the teleportation of a quantum state of electrons moving in a conductor, without the use of a prior entanglement. Their work was published in Science.

To obtain this result, the physicists at C2N used a micron-scale metallic island placed at an extremely low temperature (0.01 K). At this temperature, the electrical charge of the island is frozen, so when an electron enters into it, another electron must simultaneously exit it. When there is only one path allowing electrons to enter and leave the island (a single "channel" of electronic conduction) this mechanism results in the transfer of the quantum state of the incoming electrons on the quantum state of the outgoing electrons. With distant injection and electron emission points, this is a new form of quantum teleportation. The electrical connection to the island is made through a semiconductor material (AlGaAs, dark areas in the figure) of sufficiently low electronic density so that it is possible to control the contact by field effect with gates (colored in blue in the figure). Using this method to connect a single electronic channel to the island, the quantum state of the incoming electrons is printed on the quantum state of the outgoing electrons. The experiment is carried out in the quantum Hall regime, where a large perpendicular magnetic field breaks the temporal inversion symmetry, so that the injection and emission points are separated in space. Consequently, the transmission of the quantum state of the electrons is non-local (red arrow in the figure), mediated by the plasmons at the surface of the island. Without this mechanism, it would not have been possible to propagate the electrons through the island. Indeed, their quantum lifetime is at best only around 20 ns, whereas it takes about 60 µS (3000 times longer) for an electron to pass through. The very good fidelity of this quantum teleportation, perfect at the experimental resolution close to 1%, could be demonstrated by measuring the amplitude of quantum interferences between two paths involving, for one, the original electrons and, for the other, the electrons on which the original quantum state was transmitted.

Such a teleportation mechanism is a key element in order to use the electrons in propagation as platforms for the manipulation and transfer of quantum information.