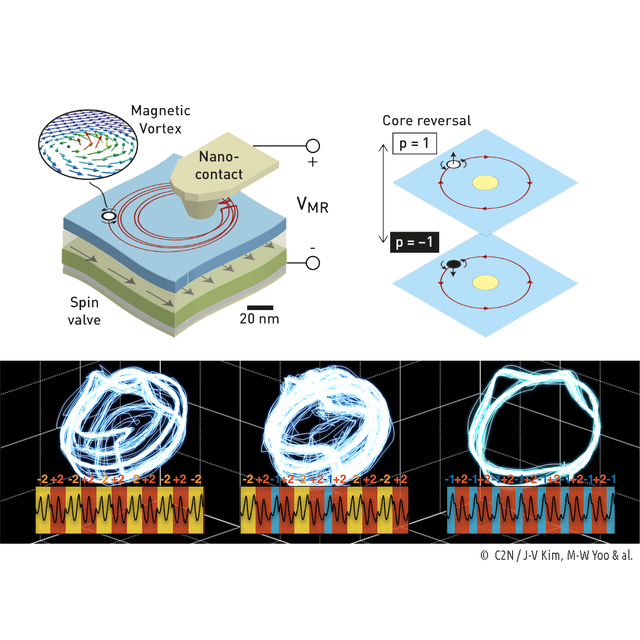 Magnetic vortices are nanoscale whirls that gyrate like spinning tops, tracing out paths in a clockwise or counter-clockwise manner in nanometre-thick materials. Under certain conditions, this sense of gyration can flip repeatedly, resulting in complex patterns of behaviour. Now, physicists have shown that chaos underpins such nanoscale motion, which translates into arbitrarily complex electrical signals that could be used for generating random numbers or securing communications channels.

Chaos in physics and mathematics describes an unpredictable behaviour that can arise in a deterministic system. In magnetic materials, chaos can be found in the motion of a particular whirl of magnetic moments called a vortex. These whirls are characterized by a ‘core’, tens of nanometres in width, which gyrates like a spinning top and traces out elliptical orbits within the plane of the nanometre-thick magnetic films in which they reside. Depending on whether the moments of the core point ‘up’ or ‘down’ with respect to this plane, the core can rotate either in a clockwise or counter-clockwise sense along these orbits – much like the minute hand of a timer if it were allowed to run forwards and backwards. Under certain conditions, the core moments can flip their orientation, reversing in the sense of rotation. Crucially, such reversals can become chaotic, meaning that in our timer analogy, the minute hand could for example run forward for a minute, then backward for two, then forward again for two more minutes, and so on, but with a sequence that cannot be predicted with accuracy over the long term.

In a first work, published in Physical Review Letters, a team of researchers at the Centre de Nanosciences et de Nanotechnologies (C2N – CNRS/Univ. Paris-Saclay), in collaboration with researchers at the CNRS/Thales joint research lab, CentraleSupélec and University of Lorraine, have shown experimentally that this behaviour can be produced in a system called a “nanocontact vortex oscillator”, where such motion can be controlled by changing the strength of the electrical currents flowing through such devices. The system, fabricated at the Unité Mixte de Physique (CNRS/Thales), involves a nanoindentation technique to create a nanoscale metallic channel through which large current densities flow into a spin valve. These currents induce the chaotic motion, where variations in the magnetoresistance capture the position of the vortex core.

In a second work, published in Nature Communications, the researchers use an advanced filtering technique developed to demonstrate that simple waveform patterns can be produced, which either repeat periodically or chaotically depending on the current applied. With the same experimental system, the researchers discovered that the chaotic state of the core’s gyration translates into the alternation of two distinct voltage waveforms over time. They have shown how to map these patterns onto random bits of information at a rate of a hundred million times per second.

These results open up avenues for using nanodevices to generate chaotic patterns for information technologies. Scaling up to produce an array of such vortex oscillators can be envisaged, which could result in GHz rates for random number generation on a single chip. Hardware-based fast random number generators are useful for encryption, but could also find use in neuro-inspired and probabilistic computing. The waveform patterns also reflect the inherent symbolic dynamics of the system, which can be exploited to improve signal to noise ratios in communications channels. By coupling such vortex oscillators to other spintronic components, such as magnetic memories and spin logic devices, one can also envisage a new paradigm in low-power computing, where the non-volatility and complexity of such systems are combined.

Figure (top): Left: Schematic of a nanocontact vortex oscillator. Right: Reversal of the vortex core leads to change in sense of vortex gyration around the nanocontact. / (bottom) Vortex trajectories in the phase space of the dynamical system illustrating periodic and chaotic behaviour. These trajectories generate distinct waveform patterns that can be used in information technologies. Crédits C2N/J-V Kim & al.