A Plug-and-play approach to integrated nanoacoustics 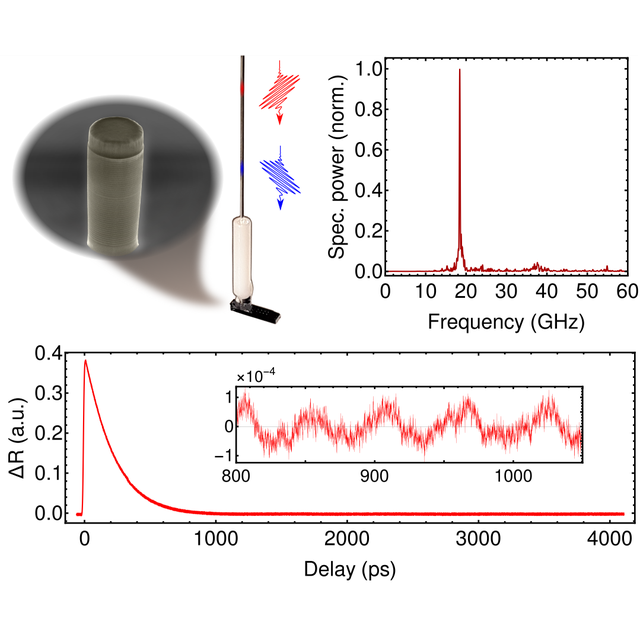 From taut strings vibrating in musical instruments to micro electro-mechanical systems for optoelectronics, vibrations cover an extensive range of applications. While at a macroscopic scale we are very familiar with these vibrations in air, i.e. sound, at the nanoscale the study of mechanical vibrations poses several challenges and opens up a virtually infinite playground for nanotechnologies. Exciting potential benefits of controlled vibrations in the GHz-THz frequency range  include better thermal transport management, novel quantum acoustic technologies, improved optoelectronic devices and the development of novel nanoscale sensors. However, the standard optical techniques used to generate, detect and manipulate these vibrations suffer from mechanical stability issues, limited reproducibility of experimental results and usually require large optical power densities that many samples do not withstand.. Researchers from the Centre de Nanosciences et de Nanotechnologies – C2N (CNRS / University Paris Saclay) and Quandela SAS, have proposed a novel strategy that simultaneously solves these problems by integrating fibered systems into pump-probe experiments, replacing complex optical alignments protocols by a plug-and-play device.

The researchers tested the new approach with a single mode fiber glued onto an opto-phononic micropillar. By spatially overlapping the micropilllar’s optical mode with the core of the fiber and gluing them together, they realized pump-probe experiments without the need for any further optical alignment beyond plugging fiber connectors. A critical requirement in pump-probe experiments is to exclusively detect the probe beam and reject any contribution from the pump beam on the optical detector. The usual way to achieve this condition is cross-polarized pump and probe beams. To overcome the  polarization rotation due to the single mode fiber, the researchers combined their fiber approach with optical polarization control, resulting in a fibered cross polarization scheme. The fibered device allows stable pump-probe signals for more than forty hours and can operate at very low excitation powers below 1mW to detect vibrations at the nanoscale. The work was published in Applied Physics Letters and the editors have selected it as a feature article.

The fibered optophononic micropillar constitutes a much-improved platform for reproducible plug-and-play pump-probe experiments in individual microstructures. It lifts the necessity of complex optical setups to couple into microstructures. In addition, the demonstrated stability and the convenience of a fiber connector as the only necessary element to interface a sample with an existing experimental setup make it transportable and allows obtaining consistent measurements from the same device at any laboratory in the world. These results demonstrate the synergy present at the C2N where united effort of internationally leading nanofabrication facilities, research groups and private companies creates remarkable impact in the science world.