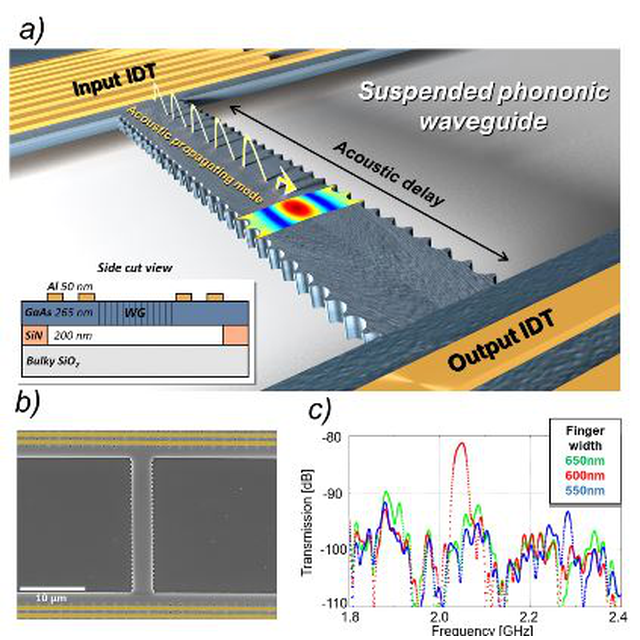 A team of researchers at C2N have demonstrated slow propagation of acoustical waves in the ultra high frequency regime (UHF) through a suspended GaAs phononic waveguide. The experimental demonstration of a group velocity below 1000 m/s can lead a delay implementation higher than 1 ns/µm in a compact and fully-integrated manner.

Optoelectronics oscillators (OEOs) have played an important role in telecommunications and navigation systems in the last few years for their great phase noise performances and frequency stability. These features are normally obtained thanks to the implementation of kilometric optical fibers as a feedback loop. This allows a consistent time delay introduction for stabilization of the oscillations but limits its compactness and exposes the system to environmental perturbations. Optomechanical oscillators (OMOs) have recently emerged as ultra-compact systems able to obtain oscillations directly in the GHz. The core of the system is a μm-size optomechanical crystal where it is possible to confine both photons and phonons in order to provide mechanical oscillations directly in the ultra high frequency regime (UHF) with an integrated optical read-out. Even though these latter showed much better compactness, the absence of a feedback loop with time delay implementation prevented OMOs to achieve so far similar phase noise performances with respect to OEOs.

A team of researcher at C2N has recently studied a novel way to introduce time delay in nano-systems playing on the acoustical properties of thin membranes made by piezoelectric III-V semiconductor materials. By engineering the acoustical dispersion of a GaAs phononic waveguide, it has been possible to show slow acoustical propagation of a mechanical mode in the UHF regime, using two face-to-face interdigitated transducers (IDTs) as acoustic emitter and receiver.

Specifically, by taking inspiration from the periodicity of a Kagome phononic crystal lattice, a suspended phononic waveguide able to properly confine a unique and well isolated propagating mode at 2GHz has been designed and tested. Transmission and filtering of several acoustic waves in the GHz has been shown in a fully-integrated system by taking advantage of the piezoelectric effect in GaAs.

Moreover, slow group velocity features have been experimentally demonstrated with a time domain approach showing a group velocity for the mechanical propagating mode below 1000 m/s. These results show how a possible delay implementation higher than 1 ns/µm in a compact and fully-integrated manner is at reach.

The proposed acoustic device can be then exploited and integrated in micro and nano-systems for telecommunications, navigation and metrology applications where a time-delayed feedback loop is needed, in order to boost their phase noise performances in a compact and fully-integrated fashion.

Figure : (a) Schematic of the system under study. Inset: side view cut of the structure. (b) Top view SEM image of the fabricated suspended phononic waveguide and IDTs (false color) in yellow. (c) Transmission data collected by the output IDT for several finger widths, highlighting the presence of the mechanical propagating mode around 2GHz (in red) when a proper set of finger width is used.