Scientists develop an ultra-fast laser modulator for the mid-IR 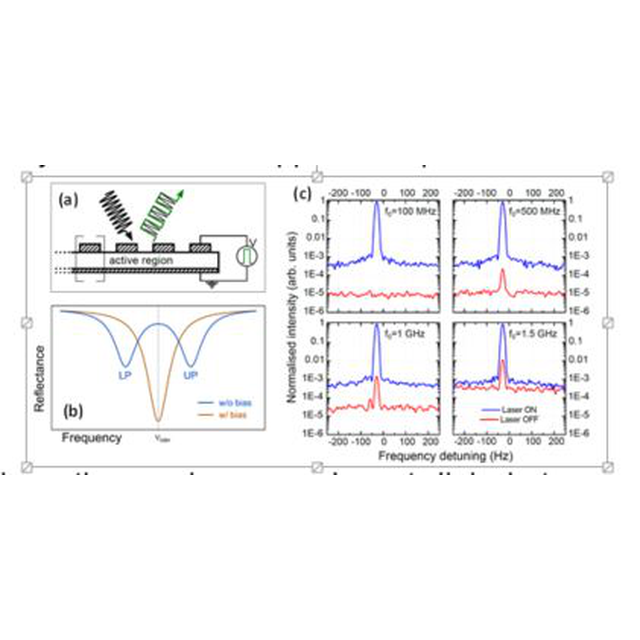 Applications based on mid-infrared radiation have grown at a very rapid pace, with clear links to environmental applications. Mid-IR cameras have propelled the field of thermal imaging, that permits to optimize and reduce thermal dissipation. In addition, the invention of the quantum cascade laser (QCL) has made compact mid-IR laser sources available, for trace gas spectroscopy for instance of dangerous/polluting gases.

All recent advances have resulted from the development of revolutionary optical components. A crucial functionality for most photonic systems is the ability to electrically modulate the amplitude of a beam at ultra-fast speeds of the order of GHz or more. While this technology exists for shorter wavelengths in the telecom range, the ultra-fast modulation of a mid-IR beam is a problem that does not have a well identified practical solution yet.

In a paper recently published in the journal Nature Communications, a team of researchers from C2N, in collaboration with an Italian team from CNR-IOM, has demonstrated a free-space amplitude modulator for mid-IR radiation (=10 m) that can operate up to at least 1.5 GHz at room-temperature [1].

First, a judiciously designed semiconductor structure has been implemented for operation in the proper wavelength range. Subsequently, this active region has been sandwiched into a metallic cavity that permits to dramatically increase the interaction between light and matter and achieve the so-called strong coupling regime.
The device then exploits an electric field to drive the system in and out of this strong coupling regime at ultra-fast rates. When a laser shines on the devices, the reflected beam is modulated in the same fashion.

Beyond the clear applicative possibilities that open up, this invention makes an elegant link between a fundamental physical phenomenon and a useful application.

(a)    Sketch of the modulator geometry: the active region is embedded in a metal–metal structure. By applying an external bias, the amplitude of the reflected beam is modulated.
(b)    Intuitive view of the modulator operating principle: with no applied bias the system is designed to be in strong coupling. Two polaritonic branches are visible in the reflectance spectrum. By applying a specific bias, we deplete an arbitrary number of quantum wells and bring the system in the weak coupling regime: the bare cavity mode is visible on the reflectance spectrum.
(c)    Normalized beat-note spectra obtained when the sample undergoes modulation frequencies at 100 MHz, 500 MHz, 1 GHz, and 1.5 GHz from top left. The modulator performs up to at least 1.5 GHz.