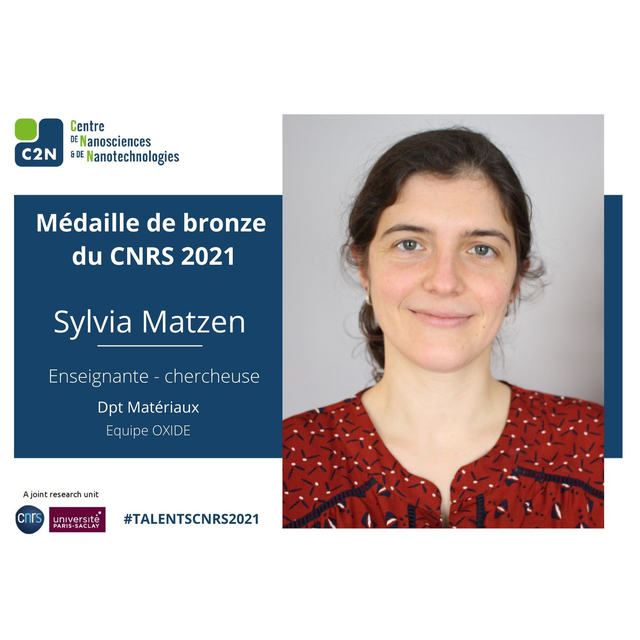 After an engineering degree from the E.S.P.C.I. school (Ecole Supérieure de Physique et de Chimie Industrielles de Paris) and a master in Materials Science and Nano-objects (Université Paris VI), Sylvia Matzen did a PhD in Materials Science at the CEA Saclay on the growth and study of epitaxial ultrathin ferrites films for spin filtering at room temperature (PhD defense in 2011). A two-year post-doc at the University of Groningen (The Netherlands) then enabled me to broaden hers research activities on ferroelectric thin films and on the control of their properties by strain engineering.
Since her recruitment in 2013 as an assistant professor in the OXIDE team of the Materials department at C2N, hers activities have been focused on the integration of epitaxial thin films of functional oxides in micro-devices for applications in microelectronics and integrated photonics. Sylvia is interested in oxides exhibiting non-linear optical properties, piezoelectric and ferroelectric properties, in studying how the crystal structure of the material and its polarization can influence the optical propagation, the charge transport as well as the generation of strain under illumination, for films thicknesses ranging from hundreds of nanometers down to tunnel barriers. Her research work focuses in particular on understanding the response of ferroelectric thin films to external stimuli: the challenge is to understand this response very inhomogeneous by nature which requires to probe at characteristic scales their temporal dynamics in connection with their local deformation. 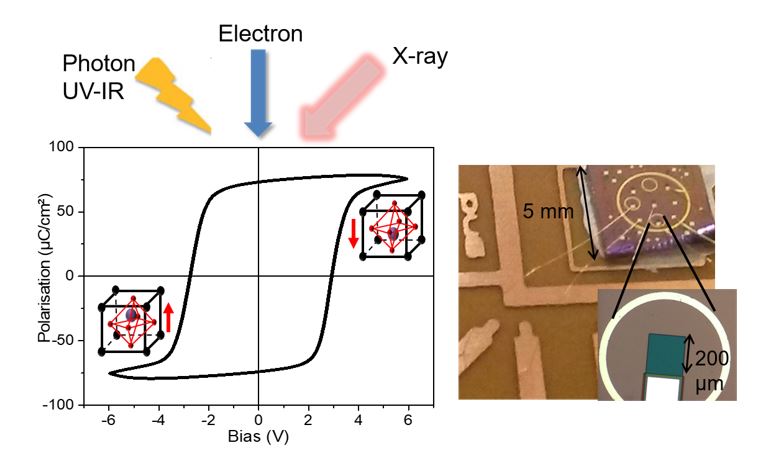 Figure : (left) Hysteresis cycle of the polarisation of a ferroelectric thin film, showing the cristalline tetragonal unit cell of the material in both polarisation states (upwards and downwards). Sketch of the coupling between the ferroelectric polarization, the charge transport, the optical propagation (IR range) and the strain generation under UV illumination measured by X-ray diffraction. (right) Example of integration of functional oxide thin films in microdevices.