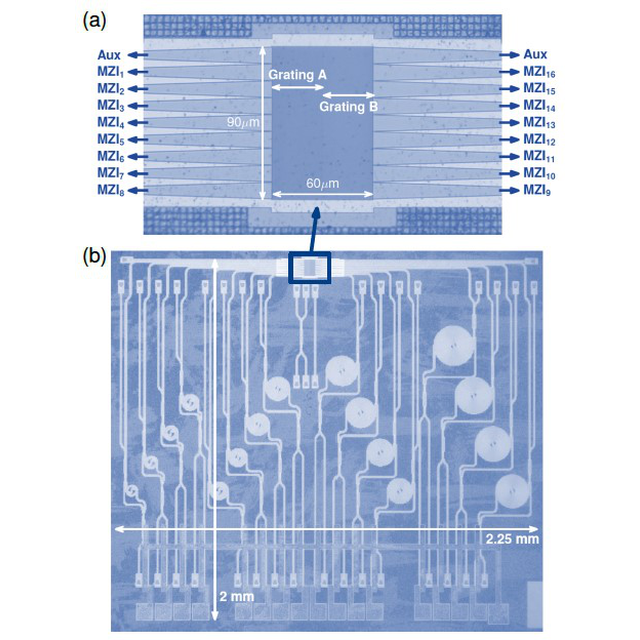 Silicon photonics on-chip spectrometers are finding important applications in medical diagnostics, pollution monitoring, and astrophysics. Spatial heterodyne Fourier transform spectrometers (SHFTSs) provide a particularly interesting architecture with a powerful passive error correction capability and high spectral resolution. Despite having an intrinsically large optical throughput (étendue, also referred to as Jacquinot’s advantage), state-of-the-art silicon SHFTSs have not exploited this advantage yet. Here, we propose and experimentally demonstrate for the first time, to the best of our knowledge, an SHFTS implementing a wide-area light collection system simultaneously feeding an array of 16 interferometers, with an input aperture as large as 90µm×60µm formed by a two-way-fed grating coupler. This is one order of magnitude are increase compared with state-of-the-art Si SHFTs. We experimentally demonstrate 85 pm spectral resolution, 600 pm bandwidth, comparable with the state-of-the-art, while achieving a remarkable 13 dB étendue increase, compared state-of-the-art solutions which use conventional grating coupler input. The SHFTS was fabricated using 193 nm deep-UV optical lithography and integrates a large-size input aperture with an interferometer array and monolithic Ge photodetectors, in a 4.5mm2 footprint.

Miniaturized silicon photonics on-chip spectrometers have been identified as an enabling tool for a wide range of applications, including medical diagnostics, biological and environmental monitoring, astrophysics and planetary science, to name a few. In integrated photonic spectrometers, light is collected and processed with a dispersive or a Fourier-transform device. Dispersive devices, e.g. arrayed waveguide gratings (AWGs) and waveguide echelle gratings, have a single input waveguide, limiting the étendue, thus compromising the achievable signal-to-noise ratio. In addition, dispersive elements are quite sensitive to fabrication imperfections. Conversely, Fourier transform circuits benefit from an intrinsically large étendue, i.e., the Jacquinot’s advantage. A particularly promising architecture for miniaturized on-chip Fourier transform circuits is the spatial heterodyne Fourier transform spectrometer (SHFTS). SHFTS relies on an array of Mach–Zehnder interferometers (MZIs) with a linearly increasing optical path length imbalance, to form a spatial interferogram from which the input spectrum is retrieved. SHFTS allows passive calibration techniques to correct amplitude and phase errors due to fabrication imperfections and to achieve a high spectral resolution both in the near-IR and the mid-IR. SHFTS also provide multi-aperture light collection systems that allow increasing the light collection area substantially. However, silicon photonics on-chip SHFTSs reported to date have not yet exploited this large aperture advantage. State-of-the-art SHFTS demonstrations use single-waveguide input and power splitting trees or multiple inputs that are accessed separately, one by one.

Here, we propose and experimentally demonstrate a novel silicon on-chip SHFTS exploiting the Jacquinot’s advantage, implementing on a wide-area collecting input formed by two grating couplers, side by side [Fig. 1(a)]. One grating is designed for a positive coupling angle θ and the other for a negative angle −θ. Light illuminating the collecting surface is redirected in the chip plane in opposite directions by respective gratings. This two-way-fed grating geometry, which was originally proposed to improve the bandwidth of fiber-chip couplers, is used here to increase the light collecting surface and the number of waveguides fed simultaneously. Based on this approach, we fabricate a SHFTS using 193 nm deep-UV lithography. The input interface, with a surface of 90 µm × 60 µm, simultaneously feeds 16 MZIs, eight on each side. The output of the MZIs is read out with monolithically integrated germanium photodetectors. The deep-UV fabrication and monolithic integration with Ge photodetectors shown here open new perspectives for large-volume fabrication of on-chip SHFTSs.

We experimentally show a resolution of 85 pm with a ∼13 dB étendue improvement for a wide-area input beam with a radius of 0.5 mm, compared with a conventional surface grating coupler (20 × 20 µm2 size). The large étendue of the proposed configuration and the powerful phase and amplitude corrections provided by the pseudoinverse technique allowed demonstration of 85 pm resolution using wide-area input aperture and integrated photodetectors, with no significant performance degradation compared to individual illumination of each MZI and read out with external photodetectors. These results open a new route to large-volume production of miniaturized silicon photonic on-chip spectrometers exploiting the Jacquinot’s advantage, which can be particularly interesting for sensing applications in embarked systems where weight, robustness, and étendue are key parameters.