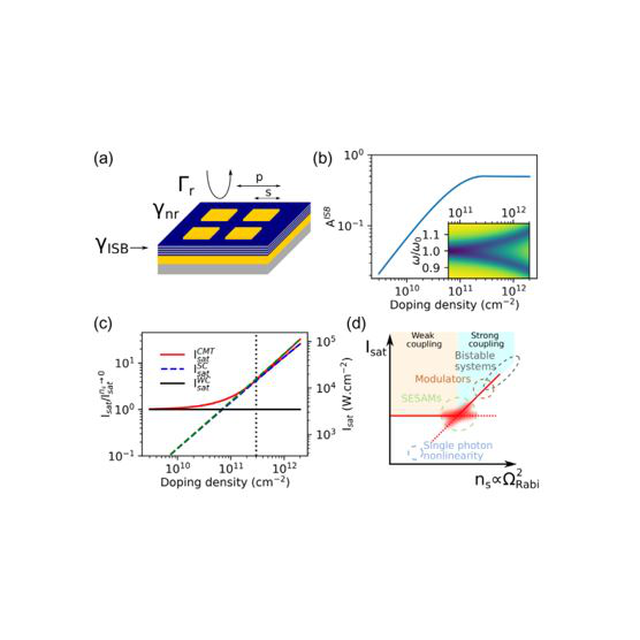 Saturation of the light-matter interaction is an inherent characteristic of the absorption of electromagnetic waves by atoms, semiconductors, and matter in general. In the solid state, the possibility of judiciously controlling saturation phenomena has important consequences for fundamental physics as well as applications.
A seminal example is the development of the semiconductor saturable absorption mirror (SESAM) based on interband transitions in semiconductor quantum wells. This development revolutionized the field of ultrafast lasers in the visible and near-IR spectral ranges, enabling a compact, stable and robust way to produce ultrashort laser pulses. Ultrafast lasers based on SESAMs now find applications in a plethora of domains.
In the mid-IR range of the electromagnetic spectrum (3µm<<30µm), quantum cascade lasers (based on intersubband transitions) are the semiconductor-based laser source of choice, and fiber-based lasers are rapidly emerging. These technologies would benefit from the availability of mid-IR SESAMs. Unfortunately, this is difficult because the typical lifetimes and oscillator strengths of intersubband transitions are not favorable: typical saturation intensities are in the 0.5-1 MW/cm2 range, few orders of magnitude above the power output level of commercial mid-IR table-top lasers. These very high values explain why saturable absorbers and SESAM mirrors are missing from the current toolbox of mid-IR optoelectronic devices: they cannot be used with current compact laser sources.
Now, scientists at C2N have developed a unified description of intersubband absorption saturation for quantum wells inserted in a resonator, both in the weak and strong light-matter coupling regimes. In particular, they have shown that the nature of the absorption saturation is radically modified when operated in the strong light-matter coupling regime, and – crucially – it can be engineered in order to operate with moderate pumping powers.

Relying on analytical calculations, the paper provides a set of simple analytical formulas that permit one to assess the saturation power levels for a given ISB system. In particular, the design for a mid-infrared SESAM with a 3 orders of magnitude reduction in saturation intensity, down to 5 kWcm-2, is demonstrated, setting the path toward, as yet nonexistent ultrafast mid-infrared semiconductor saturable absorption mirrors.

Figure
Figure 1 (a) Sketch of the quantum wells embedded in a microcavity array.
(b) Intersubband absorption as a function of the doping (ns). Inset: Reflectivity of the system as a function of ns.  (c) Normalized saturation intensity (left axis) or following our proposal (right axis) as a function of ns. The black solid line is the asymptotic saturation intensity in the weak coupling regime; the two dashed lines are the asymptotic saturation intensity in the strong coupling regime (corresponding to lower and upper polaritons). The red solid line is the analytical solution from coupled mode theory. The black dotted line shows the proposed design for low saturation SESAMs.
(d) Sketch of the two operating regimes and potential device family that can be envisioned, depending of the region of operation.