A perfectly symmetric system that ends up in a non-symmetric state: coupled optical nanocavities under coherent excitation 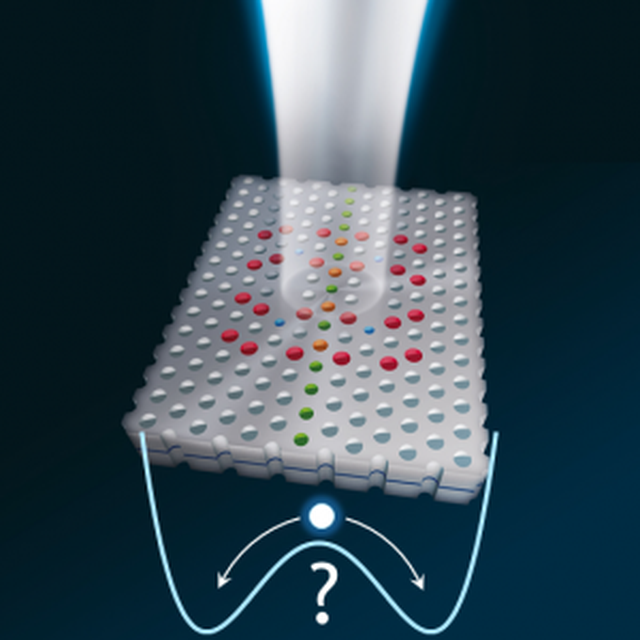 Symmetry governs nature… but not always the way we expect! Although systems tend to respect their initial symmetries in general, sometimes they may refuse to obey them. We then refer to “spontaneous symmetry breaking”, as it is the case in mechanics, hydrodynamics, or even in particle physics. As a matter of fact, such a mechanism is commonly evoked to explain the non-zero mass of the Higgs boson...
A team from C2N, together with collaborators from the Netherlands and New Zealand, have been working on a custom-made nano-system that is “perfectly” mirror-symmetric by construction: a set of two identical optical nanocavities, evenly driven by a coherent laser. Coherently-driven coupled optical cavities are the subject of intensive research nowadays as they are the building blocks of various optical information processing technologies.
Since the first demonstration of spontaneous mirror symmetry breaking in coupled nanolasers by the C2N team in 2015 [1], in which pumping was incoherent, several groups have been trying to understand what happens under coherent driving, that means with a laser fixing a well-defined phase. But why “coherence” is so important in this context? Because it enables non classical photon correlations (entanglement), as it has recently been predicted in coupled-cavity systems with “delocalized” nonlinearities, i.e., in the absence of any single emitter [2].
The present publication [3] is the first demonstration of spontaneous breaking of mirror symmetry in coherently driven coupled cavities. To achieve this goal, two evanescently coupled photonic crystal nanocavities in thin Indium-Phosphide membranes with embedded quantum wells have been realized in the C2N clean-room. Remarkably, such a system, operating in the weak coupling regime and at room temperature, is shown to be accurately described by the celebrated Bose-Hubbard model, accounting for boson hoping and interaction in optical lattices, widespread in atomic and condensed matter physics.

Symmetries play a fundamental role in physics, and are often at the heart of many observed phenomena. Indeed, natural systems tend to obey the symmetries imposed on them: if a pendulum is moved away from its equilibrium position, it will oscillate and eventually return to its vertical position. Intuition triumphs: nothing made us foresee that it would stay on the left or on the right, since the system is symmetrical. But this is not always the case: some systems can break their symmetry spontaneously, in other words, refuse to behave as expected. The hexagonal shapes of salt deserts, the curious geometries of snowflakes, the convection of air masses in the form of rolls in the atmosphere, the phase transitions in ferromagnetism, or even a flexible rod which, placed vertically and compressed from above, buckles, this time on one side only… These are some examples of what in physics is called spontaneous symmetry breaking (SSB).
One model system undergoing SSB in atomic and condensed matter physics are interacting particles (bosons) in a double well potential, known as the “Bose-Hubbard (BH) dimer”. The system has mirror symmetry; yet, the steady state of the particles, described by their wave function, may not respect this symmetry, and get confined in one of the potential wells (a single side of the “mirror”). For SSB to occur, a high interaction energy between particles (U) is necessary; it must exceed the “tunneling” energy (J) which allows the particles to jump from one well to another, |U|>|J|. Bose-Hubbard lattices are widely investigated in atomic physics because they enable quantum phase transitions in large-scale systems: the superfluid to Mott insulator phase transitions.  Interestingly enough, already in dissipative DH dimers –i.e., in the presence of losses and particle injection– recent theoretical work predicts interesting quantum phenomena such as entanglement in the SSB regime, paving the way to investigate quantum correlations and nonequilibrium quantum phase transitions in BH networks.
Besides cold atoms and superconducting circuits, integrated nanophotonics is an outstanding alternative platform for the implementation of SSB. The particles in question are photons, the potential wells are “optical cavities”, and U is provided by light-matter interactions (optical nonlinearity). The challenge is to be able to realize strong third-order –known as “Kerr”– nonlinearities, in order to reach SSB thresholds with ultralow light intensities. And for this, the engineering of nanocavity networks with III-V semiconductor quantum wells plays a key role: the Kerr nonlinearity of quantum wells is strong, and it is possible to choose at will not only the magnitude of J, but also its sign! It is the choice of this sign that makes it possible to observe the “pure pitchfork” bifurcation typical from SSB before other nonlinear phenomena take over...
Spontaneous mirror symmetry breaking in nanophotonics had already been demonstrated in 2015 by the C2N team, using two coupled nanolasers, with only ~100 photons in the cavities. But the nonlinearity was mediated by the optical gain of the material—reminiscent of inelastic collisions in atomic systems—and was therefore not Kerr-like, a fundamental difference from the BH dimer. This year, the same team, in collaboration with researchers in New Zealand and the Netherlands, demonstrated SSB in a nanophotonic BH dimer, formed by two photonic crystal-coupled nanocavities; unlike the nanolasers of 2015, here the optical excitation is coherent (resonant), and the nonlinearity involved is of Kerr-type. They show that, once the sign of the interaction energy is fixed by the material (here U>0 or “blue-shift”), the observation of a “pure pitchfork” bifurcation characteristic of SSB is only guaranteed if the tunneling energy is negative (J<0)! Such photonic meta-materials enable artificial situations than can hardly be engineered in the atomic or superconducting counterparts.

Figure : A laser beam illuminates two identical coupled optical cavities symmetrically. The cavities are the grey areas with missing holes and enclosed by red holes. Above a critical light intensity, a tiny perturbation can spontaneously break the symmetry of the system; the column of green holes is the symmetry axis. Once the symmetry is broken, one of the two cavities becomes brighter than the other. This situation is similar to a particle located at the unstable point of a double well potential; a tiny vibration will cause it to fall on either of the two wells, spontaneously.