Taming sound at the nanoscale 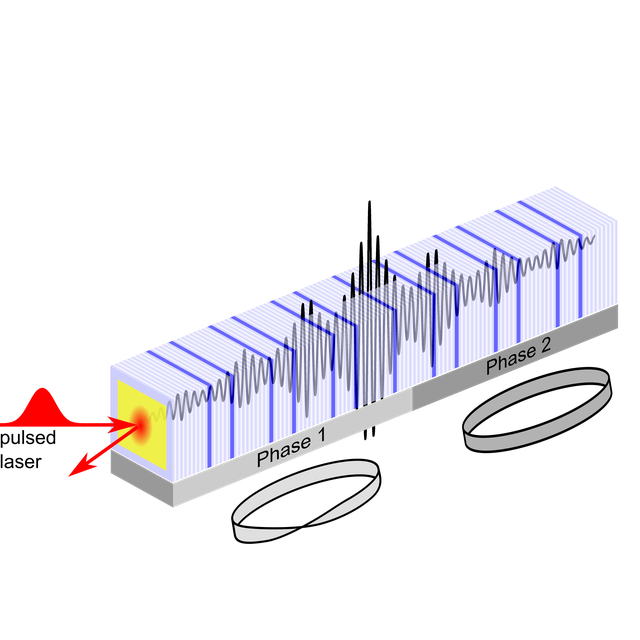 Physicists have proposed a new way to control the propagation of sound at the nanoscale. They put in evidence new ways of trapping sound at the interface between two chains of nano-resonators.

Researchers from the Centre de Nanosciences et de Nanotechnologies – C2N (CNRS / University Paris Sud), have proposed a new way to control the propagation of mechanical vibrations at the nanoscale. They have developed a simple scheme to confine sound in the 100 GHz range, based on the use of topological invariants. By attaching individual acoustic nanoresonators, and designing how they exchange energy, this work puts in evidence new ways of trapping sound at the interface between two chains of resonators. Their work has been published in Physical Review B – Rapid Comm.

By coupling semiconductor acoustic nanocavity arrays, they propose an implementation of the Su-Schrieffer-Heeger (SSH) model enabling to design acoustic edge and interface states that are robust against fabrication defects. This topological phenomenon is not unique to sound but shared with other wave phenomena such as light and electronic wavefunctions. In electronic systems, the experimental studies of topological properties rely on naturally existing materials and structures.  In nanophononics, the building blocks are artificially created, and thus a bigger parameter space can be explored. While the access to the details of the dynamics of these confined modes is challenging for light and electrons, a simple way of probing the spatial complex wavefunction in acoustic nanocavity arrays is also proposed based on ultrafast optical measurements. Briefly, a new acoustic confinement phenomenon has been proposed, which can provide insight into the dynamics of other topological solid state systems.

Finally, the proposed opto-acoustic experiments could even open the door to novel ways of controlling other excitations in the solid state, such as excitons or spin waves by topologically confined vibrations.

Figure : Schematic representation of two arrays of nanoresonators confining a topological mode at the interface. By means of ultrafast laser pulses these modes can be excited and detected. Copyright Esmann/C2N