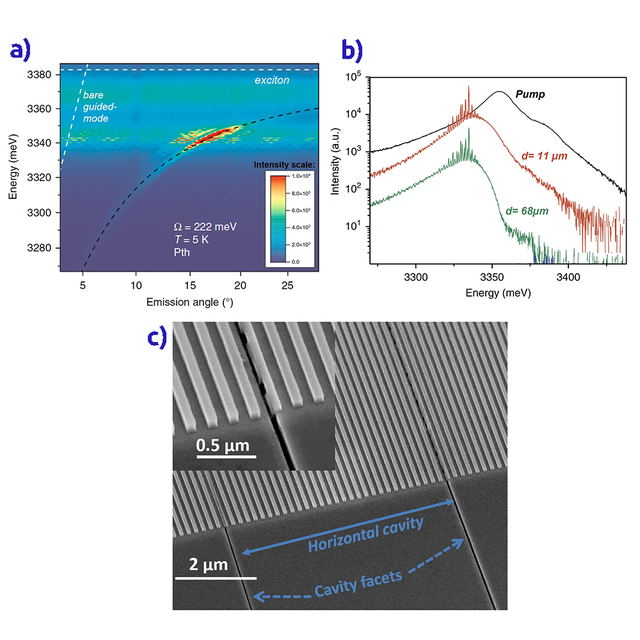 Polaritons are half-light, half-matter, bosonic quasi-particules that are able to condensate in a single quantum state. For the first time, these usually quasi-immobile assemblies were generated and moved at a high speed in a zinc oxide horizontal cavity with guided geometry, reaching 20% of the speed of light.

Polaritons are quasi-particles created from the strong coupling of light (photons) and matter –here electron-hole pairs (excitons) in semiconductors such as gallium arsenide (GaAs) or zinc oxide (ZnO). Polaritons are bosons and when their density exceeds a certain threshold they can condense into a single state which emits coherent light, resulting in polariton lasing. Half-light half-matter, polaritons are interesting because they interact with their environment more effectively than light alone. For example, non-linear effects used in optical devices may be achieved at much lower intensity thresholds. Polaritons in semiconductors have been generally created from planar, vertical optical microcavities, in which the lower energy state is characterized by a zero in-plane velocity. Hence, polaritons are generally immobile. Attempts to put condensates in motion have so far led to relatively low speeds or have led to a reduction of their interaction with their environment.

Researchers from the Institut Pascal (CNRS/Université Clermont Auvergne/SIGMA Clermont), the Centre de recherche sur l’hétéroépitaxie et ses applications (CRHEA, CNRS) and the Centre de nanosciences et de nanotechnologies (C2N, CNRS/Université Paris-Sud) have managed for the first time to demonstrate polaritons condensates characterized by an in-plane  group velocity as high as ~ 20 % of the speed of light in the material. To achieve this, they designed and fabricated an edge-emitting polariton laser and amplifier. Their device does not require a vertical microcavity but is based on the use of waveguided polaritons in a ZnO waveguide.

In contrast to vertical microcavities, the waveguide geometry provides access to a polaritonic dispersion characterized by large in-plane wave-vectors corresponding to guided polaritons propagating at a high speed (see figure). Compared to the GaAs case, polaritons in ZnO relax from the excitons reservoir by losing their energy easily due to a more efficient interaction with phonons (i.e. with vibrations of the network). It allows them to reach the threshold density required for condensation, even at high propagation speed. Despite their high speed, polaritons still interact with their environment. In addition, unlike GaAs waveguides that only operate below -200 °C, ZnO-based devices may operate at room temperature.

The achieved result makes it possible to imagine polaritonic integrated devices of a few microns in length, whereas their photonic equivalents have dimensions of the order of a hundreds of microns. The horizontal, guided geometry is also appealing because it is easy to fabricate and to integrate in two-dimensional optical circuits.

Figures : Experimental evidence of guided polaritons propagating at high speed.
a) Dispersion curve (black dashed curve- energy E as a function of the in-plane wave vector k, here as a function of the emission angle) demonstrating the polaritonic nature of the emission, with a group velocity (given by δE / δk) reaching 50 μm / ps. The value of Ω gives the coupling strength between excitons and light within the guide, responsible for the significant curvature compared to the bareguided mode (white dashed line).
b) Emission spectra above polariton lasing threshold for a 28-µm long horizontal cavity measured at different distances d from the cavity output facet, showing the cavity Fabry-Perot modes together with the onset of lasing (red and green curves). The black curve corresponds to the emission at the pump location.
c) Top-view SEM (scanning electron microsope) image of the fabricated horizontal cavity, the surface grating is designed to probe the guided mode emission (inset : closer view of the grating and of one cavity facet).
© J. Zuniga-Perez, CRHEA (CNRS) / C2N