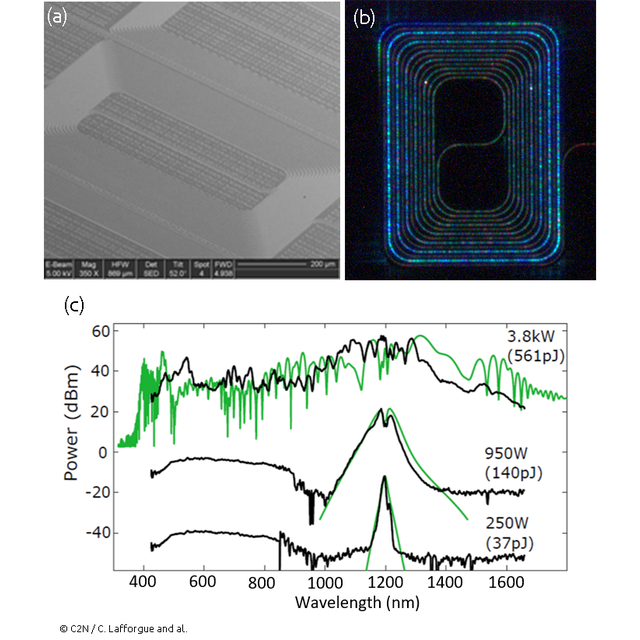 A team of researchers at C2N, in a collaboration with STMicroelectronics, have demonstrated a two-octave spanning supercontinuum generation in the O-band, a major communication window. These are the first results reported using a silicon nitride waveguide on a “back-end-of-line” CMOS compatible industrial platform.

During the last decades, massive efforts have been made to develop new high performance optical communication technologies. In this field, nonlinear optics draws considerable attention as it offers numerous effects, such as frequency conversion, useful in communications, imaging or amplification to name a few examples. We can also cite supercontinuum generation, a nonlinear optical effect consisting in a large broadening of a laser pulse spectrum, offering broadband coherent light sources. While this effect has been widely studied in optical fibers, it is highly desirable to exploit it in compact and cost-effective integrated circuits. Silicon photonics, the integration of optical functionalities on monolithic substrates of Silicon, is meant to answer this demand, as it benefits from the maturity of the CMOS industry in electronics. Several research groups have worked extensively on the development of integrated nonlinear photonic devices in CMOS compatible materials, such as silicon nitride. However, while extremely broad supercontinuum generation has been achieved on this platform, the fabrication of high quality silicon nitride films usually requires high temperature deposition steps, making it incompatible with back-end-of-line (BEOL) CMOS processes. A few research groups have found ways to fabricate supercontinuum sources that are BEOL compatible working in the C-band (a major optical communication window, with wavelengths between 1535 nm and 1565 nm), but no significant result have been demonstrated in the O-band (another major communication window, with wavelength between 1260 nm and 1360 nm).

In a work published in the journal Photonics Research, a team of researchers at C2N, in a collaboration with STMicroelectronics, have managed to demonstrate the first two-octave spanning supercontinuum generation of light in the O-band optical communication window using a silicon nitride waveguide.

The experiment was conducted at the C2N, using a tunable femtosecond pulsed laser to pump the waveguide at a wavelength of 1200 nm, with a peak power coupled inside the waveguide ranging from 250 W to 9.5 kW. The silicon nitride film that was used in the experiments has been fabricated through a low temperature (<500°C) process flow on a 300 mm industrial platform at STMicroelectronics. The fabricated waveguides show propagation losses as low as 0.4 dB/cm thanks to the use of nitrogen-rich silicon nitride, reducing the material absorption in the O-band wavelength range. This constitutes, to our knowledge, the first demonstration of a BEOL CMOS compatible supercontinuum source in the O-band communication window. The experimental results are consistent with numerical simulations performed at C2N, with an in-house written code for solving the generalized nonlinear Schrödinger equation describing the pulses propagation in the silicon nitride waveguide. The coherence of the spectrum has been investigated numerically, showing the possibility to achieve a highly coherent supercontinuum source using waveguides as short as 2 mm. These results compare very well with state-of-the-art supercontinuum sources fabricated on silicon nitride waveguide via high temperature processes, but the platform developed by researchers and engineers at C2N and STMicroelectronics has the great advantage of being BEOL CMOS compatible.

These results show how the versatility of the silicon nitride platform permits the design of nonlinear photonic integrated devices using industrial processes. Such supercontinuum sources are useful for on-chip self-referenced frequency comb sources, or for dense wavelength division multiplexing to name a few examples.

Figure: (a) SEM view of a spiral waveguide. (b) Optical image from above of an 8 mm long spiral waveguide in which supercontinuum generation occurred. (c) Experimental (black) and simulated (green) spectra for different input peak power. Curves are arbitrarily shifted for better understanding. Crédits : C2N / C. Lafforgue and al.