The key components of a terahertz receiver, fabricated in the C2N cleanroom facility, will be on board of the ESA mission JUICE 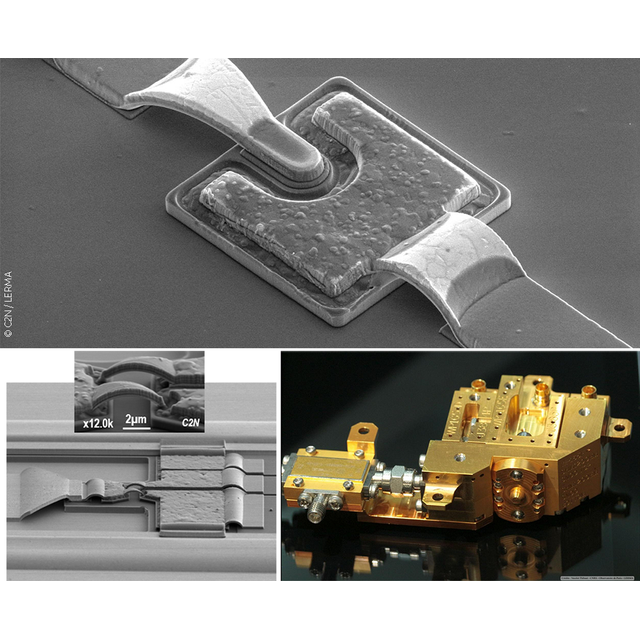 The C2N and the Laboratoire d’Etude du Rayonnement et de la Matière en Astrophysique et Atmosphères – LERMA1 have jointly developed a process to fabricate terahertz Schottky nano-diodes, leading to the realisation of the world most sensitive heterodyne receiver at 1080-1275 GHz. This device was selected to equip an instrument of the ESA mission JUICE, which will take off in 2022.

Schottky diodes are basic building blocks of terahertz and sub-terahertz frequency mixers and multipliers that can operate at room and cryogenic temperature. They are necessary to meet the needs of different CNES (Centre National d’Etudes Spatiales) and ESA (European Space Agency) space missions. CNES and LERMA have long sought a French supplier of such mixers / multipliers to build receivers and heterodyne submillimetre instruments for astronomy, planetary science and atmospheric remote sensing.

The C2N2, in close collaboration with the LERMA since 2006, has developed a manufacturing process for THz Schottky nanodiodes integrated on a gallium arsenide (GaAs) membrane, which has enabled to realize the most sensitive 1080-1275 GHz Schottky receiver in the world. This required nearly ten years of research and development: for the growth of the components materials (many attempts were necessary to obtain a fine calibration and an extremely critical doping adjustment to reach the final performances of the device), and to develop the fabrication process by taking advantage of the unique knowledge in electronic components of the C2N Technology Facility members. The design, fabrication and characterization were performed at the Observatoire de Paris by the LERMA. By bringing together the knowledge and skills of both laboratories, the submillimeter devices at 300GHz, 600GHz and 1.2 THz, with state-of-the-art performances have been realized since 2016.

JUICE, for JUpiter ICy moons Explorer, is the first large-scale mission of the Cosmic Vision 2015-2025 program of the European Space Agency scheduled to be launched in 2022 and arrive in the vicinity of Jupiter in 2030. This planetary probe will spend at least three years making detailed observations of Jupiter and three of its largest moons, Ganymede, Callisto and Europa. The payload is made up of ten instruments including the SWI, which will study the structure, composition and dynamics of temperatures in Jupiter’s stratosphere and troposphere, as well as the exospheres and surfaces of icy moons.

SWI, for Submillimetre Wave Instrument, is a submillimetre wave heterodyne spectrometer, built by an international consortium leaded by the Max Planck institute for solar system research (Max-Planck-Institut für Sonnensystemforschung) in Gottingen, Germany. SWI consists of a 30 cm parabolic antenna and of two channels that measure the spectra in ranges: 530-625 GHz and 1080-1275 GHz (corresponding to the wavelength 480-566 µm and 235-277 µm). It will be the first planetary instrument capable of observing spectral lines with a relative resolution of 107 and a frequency accuracy of 10-8 at these spectral ranges. SWI includes 3 components and sub-systems from C2N/LERMA: the 300 GHz and the 600 GHz multipliers, and the 1,2 THz mixer. The results obtained with these components and sub-systems should enable the SWI to reach a sensitivity twice greater than that initially planned, thus making it possible to reduce by four the integration times necessary for observations of the Jovian system; Jupiter and objects in its sphere of influence.

Finally, In order to ensure the correct operation of such complex components and subsystems during the JUICE space mission, numerous verifications and tests are necessary for the qualifications: launching, separation of stages, temperature variations, aging of components, radiation. LERMA has carried out these qualifications on several versions of components and subsystems: structural and thermal models, engineering models and qualification models. Most of the stages have been successfully completed, the latest operations are currently in progress on the flight models which will be delivered in June 2020.

The realization of these components benefited from the contribution of several members4 of the C2N Technology Facility, and of the LERMA. Since 2011, a research engineer from the Observatoire de Paris is working at C2N as part of a joint agreement to develop Schottky diodes technology. This research was supported by CNES over several years, by ESA and also from 2013 by the Labex ESEP as part of a thesis from the SMAER doctoral school.

Learn more about it: