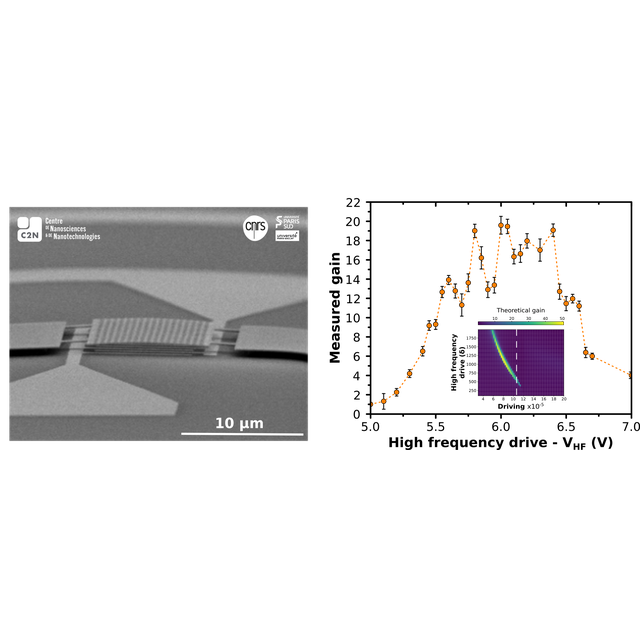 A team of researchers at C2N has experimentally demonstrated an enhancement by more than an order of magnitude of a weak electrical signal thanks to nano-electromechanical resonator. Their results, supported by theory, illustrate a general mechanism which potentially applies to a wide range of physical systems.

In signal processing and for any kind of communication channels, amplification of weak signals carrying information is an important challenge to solve in order to counter the unavoidable losses. Driven non-linear resonators can display sharp resonances or even multistable behaviours amenable to induce strong enhancements of weak signals. Such enhancements can make use of the phenomenon of vibrational resonance, whereby a weak low-frequency signal applied to a bistable resonator can be amplified by driving the nonlinear oscillator with another appropriately-adjusted non-resonant high-frequency field.

In a recent study published in Nature Communications, a team at C2N in collaboration with researchers at Laboratoire Charles Coulomb – L2C (CNRS/Univ. Montpellier) and University of Chile proposed a new method to enhance weak signals in communication channels using a forced nano-electromechanical resonator. The method relies on the manipulation of a nonlinear resonance with a high frequency non-resonant drive added to the signal. The results illustrate a general non-linear mechanism which might have applications in the fields of microwave signal amplification or sensing for instance.

The researchers at C2N show experimentally an enhancement by a factor up to 20 of the weak signals. Thanks to the theoretical contribution of a partner at University of Chile, the researchers could even predict much higher amplification factors. Interestingly, the intermediate frequency signal needs not to be resonant with any of the resonator frequencies, thus leaving a large freedom in its choice.

As a general mechanism for nonlinear resonators, this model describing vibrational resonance in a monostable forced nonlinear oscillator is quite general and applies to a broad range of physical systems. Beyond its fundamental vivid prospects, this demonstration of nonlinear resonance manipulation could be envisioned as potential means for various pervasive biharmonic signal applications, including radio-frequency signal processing or sensing to name a few.

Figure : (left) Scanning electron microscopic image of the electromechanical resonator consisting of a suspended photonic crystal membrane made of InP integrated above gold interdigitated electrodes. (right) Gain factor of the vibrational resonance as a function of the amplitude of the external driving (inset) Theoretical evolution of the magnification as function of the forcing ( F ) and the high frequency drive ( δ )