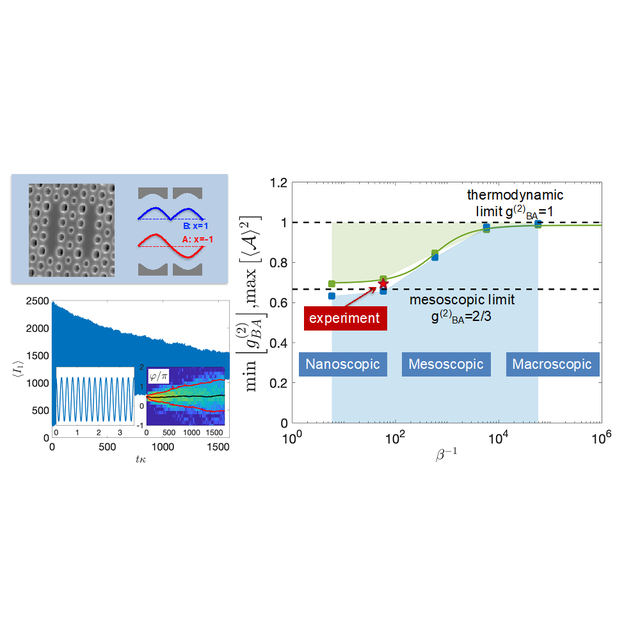 Using two coupled nanolasers, researchers have demonstrated the existence of limit cycles with only a thousand photons in the cavities, in spite of the strong spontaneous emission quantum noise influencing the system dynamics.

Any freely decaying dissipative dynamical system, like a pendulum undergoing friction in the air, ends up in a state of rest. However if the system is non-linear, and if it is continuously fed with some amount of external energy, it can develop a periodic movement known as a limit cycle. The resulting oscillations are said to spontaneously break the time-translation symmetry, because the forces acting on the system do not have any "external clock". In photonics, the limit cycle phenomenon gathers a great amount of interest as an embryo for many applications such as frequency combs, pulsed light sources, the so-called "parametric" instabilities and because it constitutes a possible route towards chaos. Although it is well-understood in classical physics, the existence of the limit cycle in the quantum domain is still controversial. In 2012, Nobel Prize winner in physics Frank Wilczek predicted the existence of a quantum periodic motion breaking the time translation symmetry, opening up a new field of research called "time crystals" by analogy to the spatial periodicity of crystals. Since then, some experimental demonstrations have emerged but, above all, intense debates have followed one another within the scientific community.

Today, the question of the survival - or not - of limit cycles under large quantum fluctuations remains open. Researchers at C2N, in collaboration with the University of California San Diego (USA) and the University of Baleares (Spain), have developed a new approach to address the question of the existence of limit cycles under strong fluctuations. It consists of using nanolasers, which are intrinsically influenced by the quantum fluctuations of the spontaneous emission noise. The researchers provided an experimental statistical proof of the existence of limit cycles of stochastic nature, called "mesoscopic limit cycles", halfway between nanoscopic (a few photons) and macroscopic (a conventional laser field). Their work* has been published in Physical Review Letters.

The study showed that in a nanolaser, made up of two coupled nanocavities, limit cycles are generated at the mode switching point, and that they survive to strong fluctuations. These limit cycles can be statistically characterized even though their very high frequency (hundreds of GHz) and their ultra low energy (only a thousand photons) make their direct observation very difficult. The relatively small number of photons in the cavities (several orders of magnitude below conventional "macroscopic" lasers) has fundamental consequences on the temporal dynamics. The authors called these oscillatory states "mesoscopic limit cycles".

The nanolasers, made of semiconductor photonic crystals, have been designed, fabricated and experimentally studied at C2N. They turn out to be an interesting laboratory not only as testbeds to study the influence of quantum fluctuations on the limit cycles, but also for the investigation of the spontaneous breaking of the time-translation symmetry, a key element of time crystals which has largely motivated a large amount of research during the last years.

*This work was supported by the French-American International Research Project (IRP CNRS) « Nanoelectronics »,  together with a Chateaubriand Grant from the French Embassy in the US.

Figure: Mode beating in coupled photonic crystal nanolasers (top left), leading to “mesoscopic limit cycles”. Despite the strong quantum fluctuations that drastically decrease the lifetime of the limit cycle, the intensity in one of the cavities undergoes thousands of oscillations before it dies out (bottom left). Right: numerical simulations of the order parameter accounting for the limit cycle amplitude (A) together with zero-time-delay second order cross-correlations [g(2)BA(0)] showing a crossover between the macroscopic regime [g(2)BA(0)=1] and the so-called mesoscopic regime [g(2)BA(0)=2/3], as a function of the inverse of the spontaneous emission factor (1/β). The latter is related to the characteristic intracavity photon number, hence the "system size”. The red star indicates our experimental result.