Topological opto-mechanical resonator for robust colocalization of light and sound 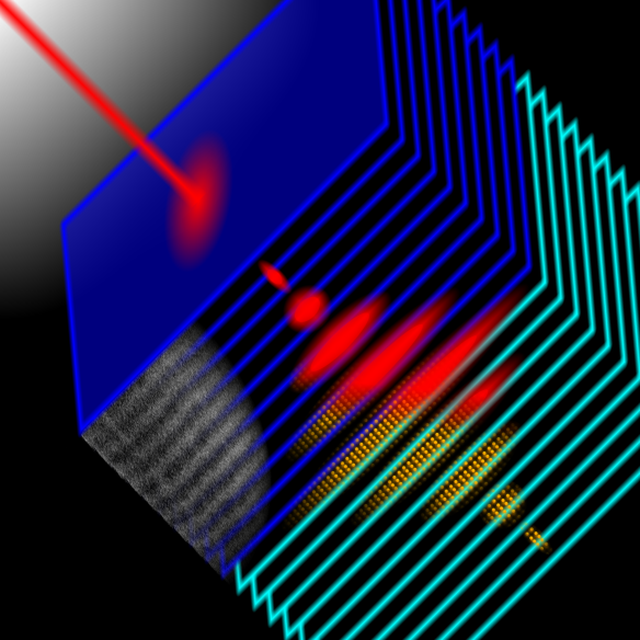 Researchers have proposed a way to robustly co-localize light and sound at the nanoscale with enhanced optomechanical interactions.
It is phenomenal to observe the identical twin behavior of light and sound in the GaAs/AlAs heterostructures. This inherent property allows us to simultaneously control the propagation of the above two excitations in a single structure. Profiting from this remarkable coincidence one can simultaneously confine light and sound in a multilayer, and control their interaction. The optical and acoustical interactions in these structures are reinforced by adding the notion of topology wherein these confined modes are protected against disorder or deformations that can occur in realistic conditions.
Researchers from the Centre de Nanosciences et de Nanotechnologies - C2N (CNRS/Université Paris-Saclay) have demonstrated the formation of a topological interface mode for the colocalization of light and sound. They can create an interface mode by concatenating two periodic lattices with inverted bands for both light and sound. The research shows the dynamical interaction of optical and acoustical modes in the structure experimentally and demonstrates a robust photoelastic interaction in theory.

Their work is published in the journal Optica, published by OSA.

Taking advantage of the topological characteristics of GaAs/AlAs superlattices, the researchers create a simultaneous topological micro-resonator for both light and sound. The topologically confined modes are engineered at the interface formed between two distributed Bragg reflectors. The interface modes are created due to band inversion in DBRs, which is related to topological invariants of their different bands based on the Su-Schrieffer-Heeger (SSH) model. The GaAs/AlAs heterostructures exhibit a simultaneous band inversion for light and phonons, leading to colocalization of optical and acoustical fields. The time-domain Brillouin scattering experiments display a dynamical interaction of the two topological modes in the structure. The rigorous calculations reveal the robustness of this interaction between the two fields with respect to disorder.
The reported structures are recognized as a potential candidate for devising robust opto-mechanical micro-resonator embedded with active media such as quantum wells and quantum dots for novel cavity-quantum-optomechanics experiments.

Figure : Schematic representation of the colocation of sound and light in a topological multilayer structure