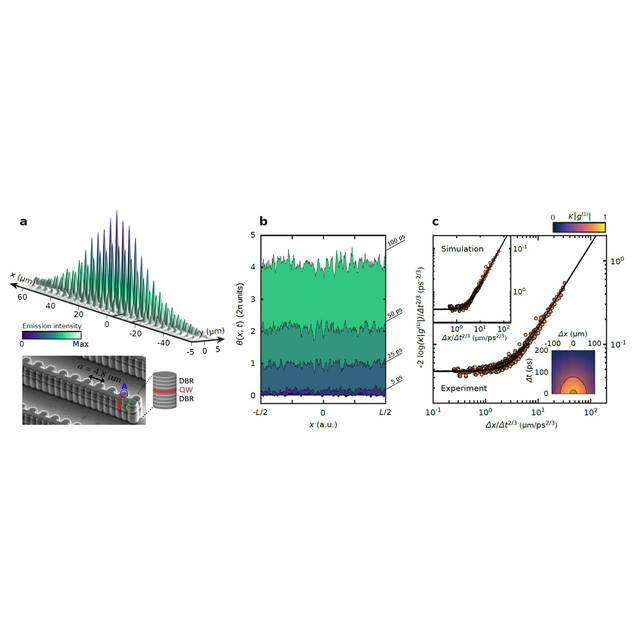 Universality is a powerful concept in statistical physics that allows understanding critical phenomena and describing them effectively on the basis of a few fundamental ingredients. Systems as different as crystalline surfaces, frost on a window or modern urban skylines under building constraints, can all be effectively described as an interface of height h(r,t), whose dynamics is governed by the same non-linear stochastic equation, named Kardar-Parisi-Zhang equation (KPZ), after the 3 physicists who first introduced it in 1986 [1]. This very simple equation is extraordinarily rich. It predicts the development of spatio-temporal correlations in the interface height: the height observed at time t and position x depends on what was observed at t=0 and x=0. Thus self-similar structures develop in time and space with universal critical exponents that only depend on the dimensionality of the interface. The beauty of frost emerge from these complex structures.
An international team of researchers has just demonstrated experimentally that photonic systems also belong to the KPZ universality class, a result theoretically predicted in 2015 [2]. The know-how in nanotechnology at the Center for Nanosciences and Nanotechnologies (C2N) have enabled to sculpt lattices of optical microcavities in semiconductor materials (see Fig.a, bottom panel). Light trapped in these cavities couples to electronic excitations and forms hybrid light-matter quasi-particles called cavity polaritons. These polaritons can accumulate massively in the same quantum state and form a coherent collective state called out-of-equilibrium Bose-Einstein condensate (see Fig.a, top panel). The wavefront of the condensate behaves in time and space as an interface (see Fig.b), and obeys the famous KPZ equation [2]. The team of Jacqueline Bloch and Sylvain Ravets at C2N generated one-dimensional polariton condensates and probed, through optical interferometry experiments, the spatio-temporal coherence of their emission. Very spectacularly, Quentin Fontaine and Davide Squizzato, post-doctoral fellows at C2N and at Laboratory of Physics and Modeling of Condensed Matter (LPMMC) in Grenoble, were able to demonstrate that the experimentally measured and numerically calculated datapoints align perfectly onto a universal scaling curve that characterizes the KPZ universality class in 1D (see Fig.c).
The numerical simulations carried out at the LPMMC in the team of Léonie Canet and Anna Minguzzi were able to reproduce the experiments, and then enabled developing a deep understanding of this new system. Indeed, since the variable describing the interface is a phase, defined periodically between 0 and 2π, the interface can wind on itself and form vortices. Such "topological" defects can potentially destroy KPZ correlations. The international consortium discovered that in the regime where the experiments operate, KPZ correlations are resilient to the appearance of vortices, because they appear and disappear in pairs of opposite vorticities, and their density is low enough.
This work opens a new avenue for the study of KPZ physics and the exploration of the rich phase diagram of out of equilibrium Bose-Einstein condensates. This very general physics applies to all out-of-equilibrium condensates, and may appear crucial for the optimization of extended solid-state lasers. Finally, all the ingredients are now gathered to probe experimentally, for the first time, the KPZ correlations in a two-dimensional system. This challenge will be attempted very soon in two-dimensional polariton condensates that are routinely realized at C2N.

Figure : a. Experimental measurement of the light intensity distribution emitted by the condensate (top panel). The bottom panel shows a scanning electron microscopy image of a 1D array of polariton microcavities manufactured at C2N to perform the experiments. b. Numerical calculation of the phase of a 1D polariton condensate at various instants in time. The temporal evolution of the phase is analogous to the growth of an interface. c. Plotted in a system of well-chosen rescaled coordinates, the points measured experimentally and calculated numerically for the condensate first order coherence (orange-colored disks) align perfectly with the KPZ universal scaling curve (black curve).