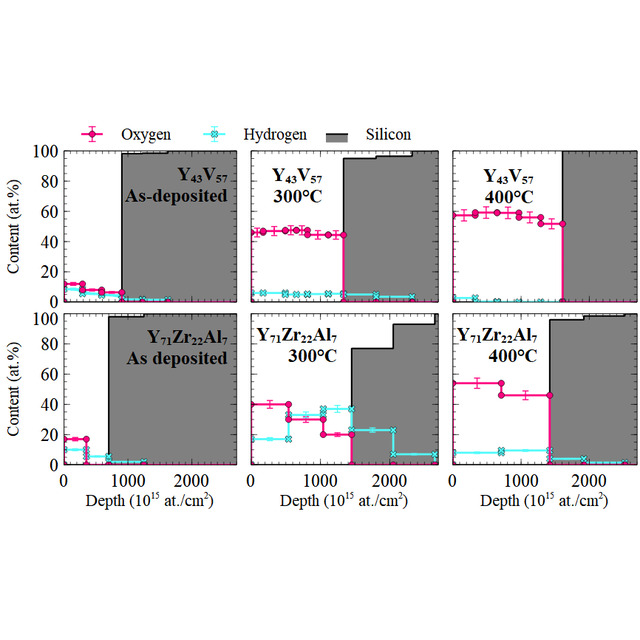 We investigated the sorption of hydrogen by yttrium-based getters for their application to vacuum wafer-level packaging of microelectromechanical systems. Thin alloy films were co-evaporated under ultra-high vacuum on silicon wafers. Getters were activated by annealing during one hour under inert argon atmosphere with traces of oxidizing species, at temperatures ranging from 200 °C to 400 °C. Three complementary techniques of ion beam analysis were performed on the samples: Rutherford Backscattering Spectrometry (RBS), Nuclear Reaction Analysis (NRA) and Elastic Recoil Detection Analysis (ERDA), to quantify metal, oxygen and hydrogen contents, and their in-depth distributions. The results show that oxidation occurs during annealing and prevents or not hydrogen sorption depending on the film composition. Due to its fast diffusion, hydrogen tends to accumulate near the film/substrate interface and starts to diffuse into the substrate as well. The different compositions of getter films are compared in terms of oxygen and hydrogen absorptions.

Some kinds of MEMS need vacuum to operate. This vacuum is commonly achieved by depositing a getter film inside the vacuum package of the MEMS. This film is a metallic reactive film that sorbs gases when it is has been annealed, like H2, N2, O2... The ANR project "Get-Yt" (19-CE08-0011) led by C2N with CEMHTI and IM2NP laboratories studied new yttrium-based getter films. The investigation reported in this article shows that some getter films based on yttrium can sorb H2 and O2 gases at the same time, if specific conditions are met such as getter composition and annealing temperature.

Figure : Oxygen and hydrogen profiles in Y-Zr-Al film before and after annealing at 300 °C and 400 °C.