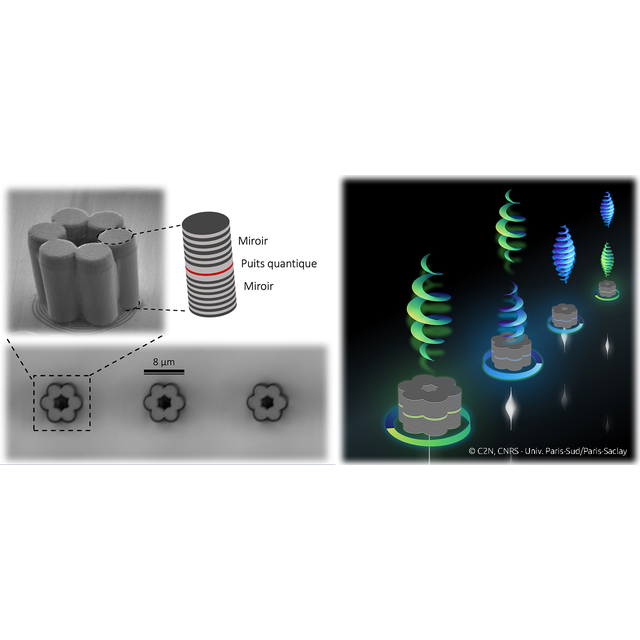 Researchers recently demonstrated the realization of an integrated microlaser based on a novel design that allows emitting light in chiral modes, thus producing corkscrews of light.

An object is said to be chiral if it can be distinguished from its mirror image. Due to their helical shape, corkscrews are particularly good examples. Such chiral objects are ubiquitous in nature, from rotating galaxies to the DNA double helix. Chirality of light can be defined when its phase winds along its propagation axis. In the 1990s, it was recognized that harnessing such a chiral feature of light fields, called the orbital angular momentum (OAM), could be technologically advantageous. Indeed OAM represents an unbounded degree of freedom, as the phase front can theoretically wind an arbitrary large number of times within an optical period. It therefore offers a drastically enlarged basis for encoding information in comparison to the commonly used polarization states of light, which are limited to a two-dimensional basis. Multiplexing information in such a higher-dimensional basis would offer the possibility to drastically enhance the efficiency of both classical and quantum information protocols. Furthermore, transferring such large values of angular momentum to massive particles is a powerful asset for optical manipulation schemes at the atomic scale (i.e. atomic tweezers).

Researchers from the Centre de Nanosciences et de Nanotechnologies (C2N) in Palaiseau, together with collaborators from Laboratory Phlam in Lille and from Institut Pascal in Clermont-Ferrand, have reported the demonstration of a novel integrated laser architecture, where light is emitted in a chiral state, thus producing corkscrews of light (see image). The disruptive advantage of this microlaser lies in the possibility of controlling the orientation of the corkscrew (from clockwise to counter clockwise) by simple optical means. Their work has been published in Nature Photonics.

In order to generate these chiral states of light, the researchers have used an approach based on two main ingredients. First, they fabricated a hexagonal laser cavity formed from six coupled micropillars. As a result of the rotational symmetry of their device, the resonating modes present OAM with well-defined values. Secondly, in order to favour emission from either clockwise or counter-clockwise optical modes, which requires breaking time-reversal symmetry in the system, they took benefit of an engineered interaction between the polarization and OAM of light. This interaction couples the OAM and the polarization of the photon modes. This coupling allows generating a lasing emission with a net chirality by using a circularly polarized optical pump. As a result, this novel microlaser emits clockwise or counter-clockwise coherent light depending on the circular polarization of the optical pump.

The very general scheme proposed and implemented in this work paves the way to the realization of novel generations of microlasers emitting chiral light that could be used for encoding information in the orbital angular momentum basis.